Classified advertising is a form of advertising that originated in newspapers, and other printed periodicals. The publication in which the advertisements appear may be sold, or it may be distributed free of charge, its printing and publishing costs having been paid for by the advertisement content. 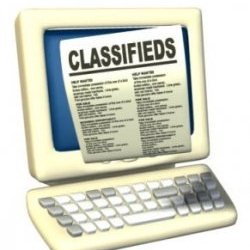 Classified advertisements are much cheaper than larger display advertisements and usually are short, comprised of text with no graphics and are charged for by the line, each line being one newspaper column wide.  It is so named because it is generally grouped within the publication under headings that classify the product or service being sold. Printed classified advertising is usually only a few column lines in length, and often has many abbreviations designed to save space and thus money.

Internet classifieds rarely use a per-line pricing model and, as a result, tend to be longer and more descriptive than traditional printed classifieds. Online classifieds offer additional features – in particular the fact that they are searchable, unlike printed advertisements.  Often they are local to a given area although some sites offer free classifieds internationally. One of the first, and perhaps the best known online classified site is Craigslist which presently is acknowledged as the world’s largest classified source, stated to enjoy over 14 million unique visitors each month. Many online sites now provide specialised classified advertising for niche market products and services, such 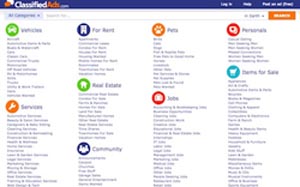 In a similar manner to banner advertising, we at Nicholas Nixon Internet Marketing advertise (and regularly update) your site and your product or service on scores of appropriate online classified advertising sites targeted either locally, nationally or internationally, as most appropriate for each client.

As an Amazon Associate, I earn from qualifying purchases.

You can find out more about which cookies we may use or switch them off in settings.

This website uses cookies so that we can provide you with the best user experience possible. Cookie information is stored in your browser and performs functions such as recognising you when you return to our website and helping our team to understand which sections of the website you find most interesting and useful.

Strictly Necessary Cookie should be enabled at all times so that we can save your preferences for cookie settings.

If you disable this cookie, we will not be able to save your preferences. This means that every time you visit this website you will need to enable or disable cookies again.